Posted 5 years ago by Travis Hancock

In 2013, the museum presented Tattoo Honolulu, an exhibition about tattooing—and the elements that converged on O‘ahu to make it an important center for the art. The show was conceived as a disruptor, and a way for the museum to reach new audiences. Four years later, it’s clear that the exhibition has left a mark. On view now through Feb. 19 is Aloha Suits, the fourth showcase of drawings, paintings, and prints by local tattoo artists, organized by Aisea Toetu‘u, one of the 10 O‘ahu-based tattoo artists included in Tattoo Honolulu.

Toetu‘u, also known as Sua Suluape Toetu’u, had been taking classes at the Honolulu Museum of Art School for a year when he was tapped to be part of the show.

“Aisea was really interested in the art part of tattooing,” explains Art School director Vince Hazen, who, along with all the HoMA curators, worked on Tattoo Honolulu. “So after Tattoo Honolulu, I approached him about doing a tattoo-related show at the school. Now he’s curating it for the third year in a row. He brings the group together. He also encourages them to take classes here, and to make visual art that can go on the walls, not just tattoos and tattoo designs, but pushes them to try other media.”

Although Toetu‘u is Tongan, Filipino, and Hawaiian by ancestry, he earned his title of Sua Suluape through his work with the master Samoan tattoo artists to revive traditional Tongan tattoos that were banned by Christian missionaries 200 years ago. Today he works with leaders of the “New Tribal” tattoo movement and fellow Tattoo Honolulu alumnus Lucky Olelo at Soul Signature Tattoo.

Aloha Suits features Hawai‘i themes set within the full body, or “body suit,” style of tattooing. “A lot of the artists took that theme on, but not everyone,” says Hazen, walking through the show in the school’s second-floor mezzanine. “The tattoo artists come and drop off their work, and there’s no curating after that, no juries. Everything that shows up goes in.” 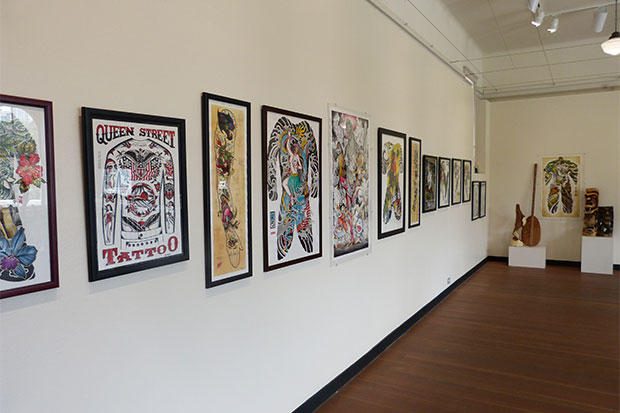 “You can see it’s really diverse,” Hazen says, “from really graphic, almost screen-printed works, to photorealism in charcoal. One thing that I love about this community is that they are working artists who are paying their bills with their art. I know a lot of artists who end up doing something else to pay their bills. So I really respect that about them, and their ability to be creative on the spot.”

Toetu’u still takes classes—he is currently enrolled in three—but is now also a teacher. On Wednesday nights through Feb. 27, he passes on his knowledge of in Pacific Island Patterns, and he will speak at PechKucha Night Honolulu: Ink on Feb. 17. Last week, he found some free time at Soul Signature to meet with me to chat about his growing relationship with the museum.

Were you familiar with the museum before you were invited to be part of Tattoo Honolulu?
I was taking classes before. I was taking a lot of the Chinese brushwork classes. I took two semesters of that. Then Vince started doing outreach, and I met him through Lucky Olelo, who told Vince, “If you want to get some people together for a tattoo show, get in touch with Aisea, because everybody knows him.” Since the 90s I’ve been doing a lot of shows and community things for the tattoo artists.

Were you taking Chinese brush painting classes to improve your tattoo work, or out of curiosity?
It was a curiosity. I was always fond of wash and inks, and I loved something about the strokes they did. I had an awesome teacher. Then they got a new awesome teacher, Tom Tong, an amazing artist. So I’ve taken five or six different classes from him.

And you get other artists from Soul Signature to take classes?
Yeah, I had Lucky go and he took a jewelry class. I tell these boys why these arts are very important—it’s because it’s a place where we can be us. When we’re tattoo artists, we have to do what the people want. I always look at the Art School as my place of meditation. Here it’s a grind. People want tattoos, and they want things sometimes that are unrealistic. We have to be polite about it and tell them it might not work out. With our expertise our medium is skin, the tattoo artist’s job is the skin—no canvas, paper, carving—skin. We have to use the skin to make these images for people. We work with layers, back and front, and using negative space, but when we try to explain that to people they feel like we’re downing their creativity. It’s not that, we just have to make sure it works well.

Back in the day, tattooing was simple, lick-’em-stick-‘em tattoo parlor style. It was also affiliated with gangs and sailors, but I came from an era of Polynesian revival and renaissance. So when the Polynesian style started making its way into the parlors, it changed the vibe of tattooing. One is coming with culture, and the other is more Western, urban, treated as that bad alley art. I was part of that Polynesian movement, but ironically I came into it from the gang tattoo side. I was interested in that because everyone was doing that in juvie hall days. But then I was inspired and influenced by my mentor, my traditions, and my family, and my grandma, who were all telling me that Polynesian tattoos are highly respected. So one side was degraded and one was respected. So how do I find the balance? I would say in those years that became my goal in life. I didn’t fit into one or the other, so I was stuck in a parallel world. But that was cool, it was fine, because in finding the balance it was actually kind of a new world. Then I started working with artists who were on the same path as me, and started doing this New Tribal stuff.

So taking classes helped you find those compromises for clients in creative ways?
In tattooing, we learn one thing, then we go to the Art School, and learn structure, form. We only learn one thing here—draw, trace, and stencil—but when you start learning compositions, shades, tones, and color values, it’s a whole different world. But remember tattooing in Western art is considered a sort of urban art, more like the street art, graffiti category, and then you have the fine arts. When you can connect the two sides with the spiritual power of art, we all come to the same level.

What did it mean to you, and others in the tattoo community, when you heard the museum was doing a tattoo exhibition?
It was amazing. It was very emotional for me at that time, because for our first generation from our island, tattooing is still looked down upon a bit by the Christianity side, and then I got into it through a gang. But when I heard the museum was interested in us, I thought it was very humbling. It also changed us. We had to adjust to that. We were like, “Wow, we’re going to be in a museum. What are the chances?” To meet great people who appreciated our work and not hound us at our business and pay for it, doing trades and stuff, but to appreciate it as a painting or work of art—I thought that was beautiful. I wanted to keep that momentum. It was new and different.

A lot of tattoo artists didn’t want to do it. They said, “Nah, it’s not for us. There’s no money involved.” Some tattoo artists are all about money, but some love the cause of art, and crossing over.

I imagine those who were interested in the art side are the ones who have participated in your exhibitions at the Art School.
Yeah, in the industry there’s the moneymaking, the social media, and those tattoo TV shows, but their artwork is horrible. And added to that is that they aren’t dedicated to the craft, they aren’t sharpening their blade, sharpening their knife. The Art School sharpens that.

How do you think the tattoo community feels about the museum?
It opened it up to us, and it made us strive to be better. Now this one part of the world accepts us. We are still underground, but then the underground is being recognized. The fine artists train one way, and they learn from generation to generation, almost like a kung fu school, and we are the contemporary people. Sometimes we need contemporary to connect to that other world, and to the traditional as well. I feel like Maui and our other demi-gods had to do things outside the box so they could relate to the new, too.

Do you plan to keep this relationship going?
I’ve actually signed up for three classes, and not only painting. I’m going to do a papermaking class. It’s just doing things that are art-related, somehow the Art School makes you feel better about yourself. You always learn something. You’re always learning different angles.

And you are teaching, too.
Yeah, it’s crazy. I’ve been teaching patterns and compositions. I’ve been showing them different patterns in the Pacific and how they are related to everyday life. You know, I was a very shy kid. I don’t like speeches and talking, but art made me talk.

A ‘mata hoata,’ or Marquesan eye pattern, drawn by Toetu‘u in his classroom at the Art School.

Will you be doing more tattoo shows at the Art School?
Yeah. It’s a time for us to gather together communities who are inspired by art, versus the image of tattooing. And I’ll be speaking at PechaKucha for the first time. I’m going to take the challenge on—it’s crunch time, and I’m trying to put some things together, but I think I can do it. I’m doing it for the challenge, and art is challenging as a whole.

Even more challenging when it’s permanent, on someone’s body.
I guess, yeah. But you would be amazed at some tattoo artists who only know what they know, and they don’t try new things. I think in art it’s up to you if you want to challenge yourself. If you stay here you get stagnant and you get bored. If you are a painter, you paint to be seen. If you are a musician, you need to be heard. Performing artists need to be seen, too. That’s what artists do—we create, then we show.